Heidelberg October 2020. We are pleased to see our case report on reversible trifocality published in the October edition of the American Journal of Ophthalmology Case Reports. We present a case in which the trifocal sulcus fixated IOL was exchanged six months after surgery – in effect correcting a postoperative refractive error from the first surgery. The supplementary IOL was removed and exchanged easily, and this underlines the claim that the Duet procedure can indeed provide trifocality, which is reversible if needed.

Reversibility of the Duet procedure: bilateral exchange of a supplementary trifocal sulcus-fixated intraocular lens for correction of a postoperative refractive error

In this report, we present a case in which the trifocal sulcus fixated IOL was exchanged six months after surgery to correct for a postoperative refractive error. The supplementary IOL was removed and exchanged easily, and this underlines the claim that the Duet procedure can indeed provide trifocality, which is reversible if needed.

The patient had undergone refractive lens exchange with combined implantation of a monofocal toric IOL into the capsular bag and a trifocal supplementary IOL into the ciliary sulcus in both eyes. The patient reported perceiving dysphotopsia, and the visual acuity results were disappointing: decreased uncorrected distance visual acuity due to the refractive outcome of -0.75 diopter sphere (DS) /-0.25 diopter cylinder (DC)x10° for the right eye and -1.0DS for the left eye. In the second operations, we exchanged the supplementary IOLs to correct the residual refractive error and achieve the target refraction of emmetropia.

UDVA increased from 0.50 logMAR in both eyes before the IOL exchange to -0.22 logMAR in the right eye and -0.20 logMAR in the left eye. Binocular uncorrected near and intermediate visual acuities were -0.10 logMAR and 0.00 logMAR respectively after exchanging the sulcus-fixated supplementary IOLs, allowing for complete spectacle independence.

Figure 1: Intraoperative images of the right eye during the initial surgery using a digital marking system. (a) After the refractive lens exchange and (b) after the implantation of the trifocal Sulcoflex IOL. The diffractive rings of the supplementary IOL can be seen clearly in this image.

Figure 2: (a) Intraoperative image of the right eye, acquired after the IOL exchange. (b) Photo in retroillumination at the 3 months follow-up visit showing the final result. 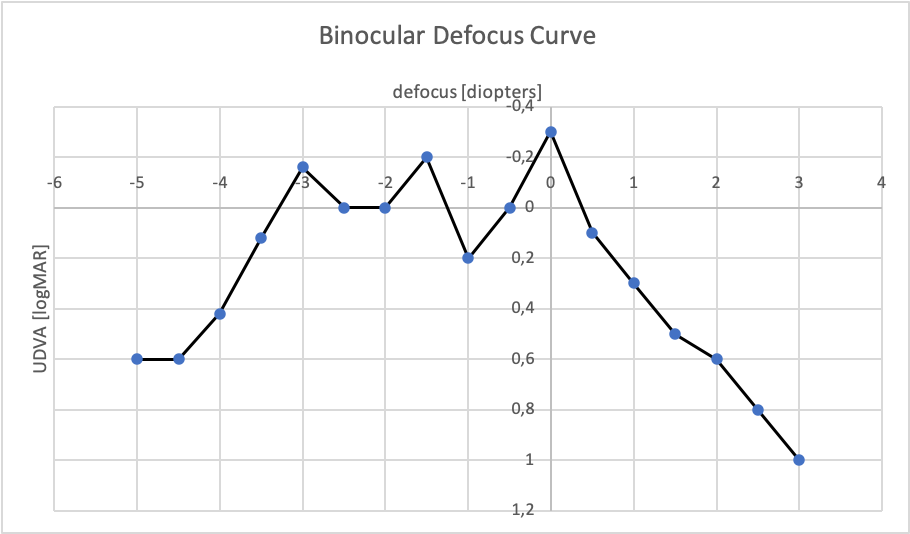 Figure 3: Binocular defocus curve 3 months after the IOL exchange. The curve shows the three foci of the trifocal supplementary IOL.

Importance of our findings

This case demonstrates one of the main benefits from duet procedure: The option to easily remove or exchange the supplementary IOL if necessary. The implantation of a monofocal or monofocal toric IOL into the capsular bag and of a supplementary trifocal IOL into the ciliary sulcus in one surgery is a safe procedure to create reversible trifocality. It should prove advantageous in cases where the surgeon has uncertainty regarding a patient’s eventual tolerance of multifocal optics, but the patient has requested spectacle independence. Reversibility may also be of advantageous in healthy eyes where patients develop diseases later in their life when multifocality could be a hindrance (e.g., macular degeneration or glaucoma).

How to cite our paper

How to get our paper