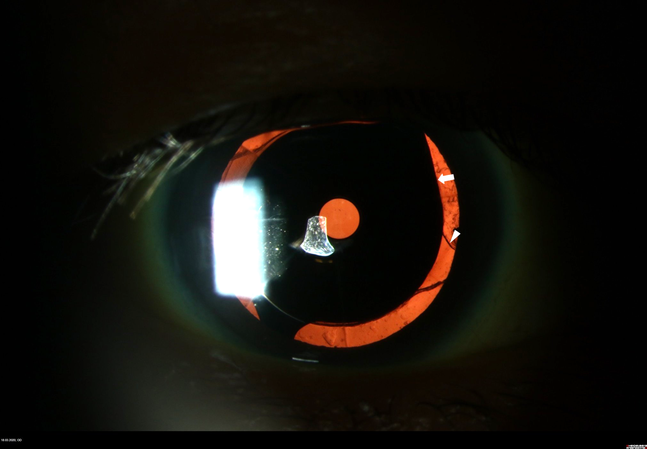 We are pleased to see our report on using a Morcher Xtrafocus lens to treat a patient who had radial keratotomy 22 years ago. It is published in the latest American Journal of Ophthalmology in its series, AJO Case Reports. What is Radial Keratotomy?

Today the procedure is seldom performed, but this was at one time a popular corneal refractive technique. It was developed in the 1970s by Prof. Svyatoslav Fyodorov in Russia. The surgeon made up to 16 radial incisions on the corneal surface, and this flattens the cornea and reduces its power, thereby treating refractive errors. However, this surgery was associated with several postoperative complications. It became replaced by more predictable refractive procedures: laser-assisted in situ keratomileusis (LASIK), laser epithelial keratomileusis (LASEK); and, increasingly, we use phakic intraocular lenses (IOLs). What was the difficulty with this patient?

Nowadays, surgeons face a particular challenge when patients present with cataracts and who were treated decades previously with Radial Keratotomy. The cornea’s impaired stability may result in an intraoperative Radial Keratotomy scar dehiscence or in a postoperative fluctuation in refractive error despite careful IOL power calculation.

In cases of residual refraction, treatment options are also rather limited as the cornea had already been treated. Supplementary implantation of a sulcus-fixated supplementary IOL can be an option in such patients, and we implanted a sulcus-fixated pinhole lens to address the fluctuating residual refractive error after cataract surgery in a 62-year-old patient who had bilateral radial keratotomy 22 years earlier,

After the patient underwent uneventful bilateral cataract surgery using the ASCRS IOL-Calculator for post-Radial Keratotomy, he had fluctuating subjective manifest refraction on both eyes. To correct the large fluctuating residual refractive error and subjectively worse visual acuity, we implanted an Xtrafocus IOL in the right eye. One week later, the uncorrected distance visual acuity (UDVA) was already 0.1 logMAR and the patient started to have stable vision. Three months after Xtrafocus implantation, UDVA was −0.04 logMAR which did not improve with manifest refraction. The patient expressed high satisfaction, good subjective binocular contrast sensitivity, comparable visual field outcomes, and an elongated depth of focus.

What’s the importance of these findings?

Refractive surgery is often conducted on young patients, myopes in their twenties or thirties. Those patients who were treated with radial keratotomy in the 1970s and 80s are now at an age when they are developing cataracts.

Despite meticulous preoperative planning, surgeons may still be confronted by residual, postoperative refractive errors. There are different approaches to address this complication. In our case, the Xtrafocus IOL was chosen for this patient for two main reasons: first, while implantation of other supplementary multifocal lenses would also have been possible, stable Manifest Refraction values are necessary to calculate the exact IOL power. Implanting such lenses in a patient with unstable refraction may lead to another postoperative residual refractive error. A pinhole lens, on the other hand, has no dioptric power and is therefore less dependent on the stability of subjective refraction. Secondly, a pinhole optic’s high tolerance to corneal aberrations and astigmatism can also be advantageous in cases of fluctuating refraction.

In our case, the pinhole lens not only helped eliminate the fluctuation in residual refraction after cataract surgery but also provided an elongated depth of focus without greatly affecting the visual field. The supplementary implantation of the Xtrafocus lens can offer an effective option for the treatment of unstable refractive errors after cataract surgery in patients with a history of corneal surgery.

Svyatoslav Nikolay Fyodorov was born on August 8, 1927, in Ukraine. He is remembered as an extrovert and an innovative surgeon of the Soviet era, who developed radial keratotomy to correct myopia. Tens of thousands of patients underwent this surgery at Mikrokhirurgiya Glaza, his eye microsurgery institute in Moscow, and at regional surgery centers throughout the USSR. In 1995 he stepped into politics and was elected to the Russian parliament, and in 1996 he ran unsuccessfully for president.

Returning from an academic conference in 2000, Fyodorov died in a crash of his clinic’s helicopter on the outskirts of Moscow.