A Lab with history 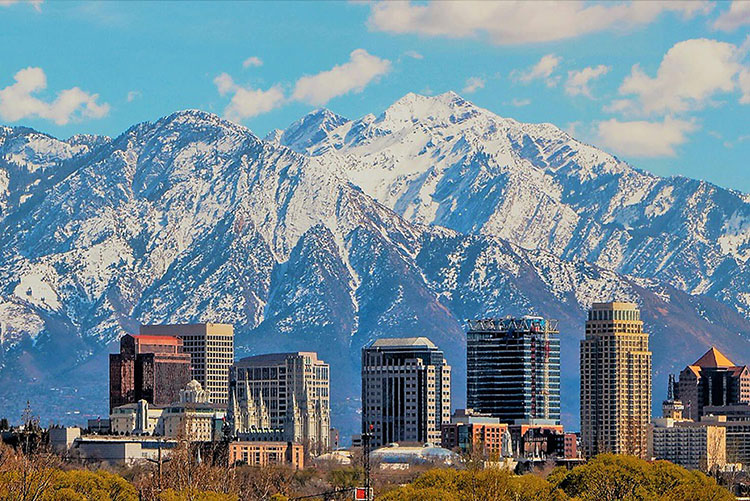 The origin of the David J Apple International Laboratory for Ocular Pathology goes back to the establishment in 1980 by David Apple and Randall J. Olson MD of a pathology laboratory in Salt Lake City, Utah, which became known as the Center for Intraocular Lens Research. 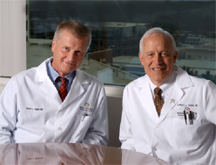 …., and the laboratory has geography too: Salt Lake City to Charleston, back to Salt Lake City and thence to Sullivan’s Island near Charleston and finally to its present home in Heidelberg, Germany.

In 1980, David Apple had just joined Dr Olson’s department as a general ocular pathologist when, among the first specimens, they received was an enucleated eye that contained an early J-loop Posterior Chamber IOL. Before excision, the eye had become blind as the patient had developed many IOL-related complications. The specimen was sent to Utah by John Lyman MD and I. Howard Fine MD - surgeons from Eugene, Oregon. They had explanted (but had not implanted) the lens. Apple and Olson labelled it IOL # 1, and it marks a starting point in the field of IOL pathology. Until then, the scientific study of IOLs and IOL-related complications had not properly begun.

Apple submitted a report on the enucleated eye of IOL No. 1 and its many complications to the Ophthalmology journal. Given the usual waiting list for papers to be published, Apple was surprised when the editors promptly accepted his paper. But he learned later that they did so because the Editors were strongly anti-IOL, as were many in the ophthalmic establishment at this the time. They believed that Apple’s paper – with its numerous images of blood-stained tissue, erosions and an extremely malpositioned lens — might put a final nail in the coffin of IOLs. But practising surgeons read the account with interest. The results were helpful to them in recognising the pathology of IOL complications. A few years later, Apple published a comprehensive article on IOL-related complications. The paradox is that quite soon after publication, the use of IOLs increased.

To understand the editors’ and the surgeons’ reactions to the report on IOL#1, one has to look at the history of IOL in the first 30 years after Sir Harold Ridley invented the implant in 1949. In the 1950s, 60s and 70s there had been a generally poor uptake by his fellow ophthalmologists in using IOLs to treat cataract. Thus much of the generation of patients between 1950 and 1980 was deprived of the value of his invention. Indeed, the quality of IOLs was variable in these thirty years. The implantation techniques of that period were not yet perfect. Still, surgeons could achieve good results with some of the lenses by carefully inserting them, even with the less-than-optimal, large-incision, extra-capsular-cataract-extraction techniques that were then available.

One main reason for the delay in the use of IOLs was the antagonism some ophthalmologists held toward Ridley and his “radical” new invention. The prevailing dogma was that it was dangerous to implant a “foreign body” permanently into the eye. The future was in doubt for the subspecialty of IOL cataract surgery. Especially in the university and teaching hospitals, IOL use was actively discouraged by the heads of departments. The exception tended to be in the private sector, where surgeons saw the advantages of implanting IOLs (pseudophakia).

In 1984, Apple submitted a request for a grant from the US National Institutes of Health (now the National Eye Institute) to study IOLs; and they refused it. Some of the reviewers felt IOLs were not important enough to receive grant-aid and considered that IOLs would probably not remain a valid surgical option for much longer. With hindsight, we can see that their decision was wrong, but in later years Apple looked upon it as fortuitous for him because instead of depending on federal funding, he began seek assistance in the private sector, especially sponsorship from the IOL industry.

Today, cataract surgery with IOL implantation is, in most cases, a very successful procedure. Advances since the 1940s in the use and application of new instrumentation, operating microscopes, and phacoemulsification contributed to this success. So also did the work of Apple and his colleagues. Many of their research studies, projects, and evaluations of cadaver eyes in the 1980s helped improve the overall success of IOL implantation and improve the patient’s visual results. In particular, Apple’s research focused on avoiding complications by improving on IOL design and the choice of haptic materials. At the start of the 1980s materials such as Nylon and Polypropylene were commonly and frequently used to make haptics for the IOL. Surgeons liked these materials because they were flexible,  easy for manipulating a lens within the confines of the anterior segment. However, the autopsy-eyes with these lenses told a different story: the materials had poor “memory”, and the lens lost its shape in the eye. As a result, the implant moved and did not remain in the anatomical place the surgeon had intended. The pathology results correlated well with the medical history: patients’ symptoms of perceptible lens decentration, inflammation and other sequelae. What was advantageous to the surgeon at the time of surgery (flexible haptics) was over time likely to be a danger to the patient. The industry listened to Apple, and by the end of the 80s, most lenses were being made as single-piece PMMA lenses (the haptics and optics were lathe-cut or moulded from one piece of PMMA). The haptics were flexible enough to manipulate, but the PMMA retained a better “memory” in the eye.

The Center in Salt Lake City received an increasing number of specimens sent to the lab, both explanted lenses and autopsy eyes with IOLs. By 1988, David Apple had received and studied more than 1,000 of both types of specimens.

Apple moved to Charleston in 1988 to take on the role of Department Chairman of the Storm Eye Institute of the Medical University of South Carolina. The IOL research centre moved too. It continued to flourish, renamed the Center for Research in Ocular Therapeutics and Biodevices to acknowledge an expansion into other fields besides IOLs (e.g., excimer laser technology).

Apple regarded the highpoint of his research productivity was from 1994 to 1997. In the late nineties, he developed symptoms of life-threatening cancer. It took him a couple of years to undergo surgery, chemotherapy, and radiation therapy. He found he could not continue with strenuous activity at that stage. Fortunately, as Chairman, he had just finished a $10 million fundraising campaign to enlarge and rebuild the Storm Eye Institute building.

While many individuals have contributed to the success of the laboratory, Apple would have singled-out one gentleman—Kensaku Miyake of Nagoya, Japan. Apple modified and perfected his original video technique to create the Miyake-Apple posterior video/photographic technique, which has become an indispensable tool for the accurate analysis of IOL-implanted eyes, obtained postmortem.

Back to the Rockies

In the early part of the new century, Apple met his friend Randall Olson again, and they agreed that Apple should return to Utah, where all this work had begun. A new building, dedicated in August 2006, housed the new research centre, The Moran Eye Center in Salt Lake City. David Apple accepted the position of Director of an eponymous laboratory, The David J. Apple, MD, Laboratories for Ophthalmic Biodevices Research. But this was not the final home of the Apple Lab. It became clear that the high altitude of Salt Lake City was inimical to David’s health and convalescence. The lab moved again when he set it up on the coast, this time at his new home on Sullivan’s Island near Charleston, South Carolina.

Back to South Carolina

Apple recognised that his age and his illness did not leave him much time to conclude his work and he worried about who would continue his work. He also wanted to “get back to basics”: to provide again information and advice to surgeons by reinstituting the study of autopsy-eyes that he and his colleagues began years ago. He was concerned that many new lenses and other devices came on the market with virtually no oversight. He was distrustful of the marketing of fashionable premium IOLs (multifocal and accommodative designs), that appeared to him to have unfounded claims. It seemed to him that many new lenses lacked real proof of safety and efficacy. He had shown throughout the years that the careful examination of autopsy-eyes could reveal a truth about how the implant works. “These findings do not lie and cannot be spun“, he would say.

David Apple died on August 18, 2011, in Charleston. The lab is now in Heidelberg, in the Eye DEpartment headed by Gerd Auffarth. Here, David Apple’s successors will create a database of IOL results, building on similar studies to those conducted by David in the USA.  His work continues, the study of IOLs in the clinical setting, testing in the laboratory and the examination of explanted IOLs or autopsy-eyes. At present, in the laboratory we have more than 20,000 explanted IOL records and the number is growing. We have notified most eye banks in the US and Europe regarding our intentions, and they are kindly beginning to submit specimens.

Donald J. Munro is the Business Development Director of the Laboratory, University of Heidelberg.
The Legend of Albert Schweitzer
Congratulations, Ramin!